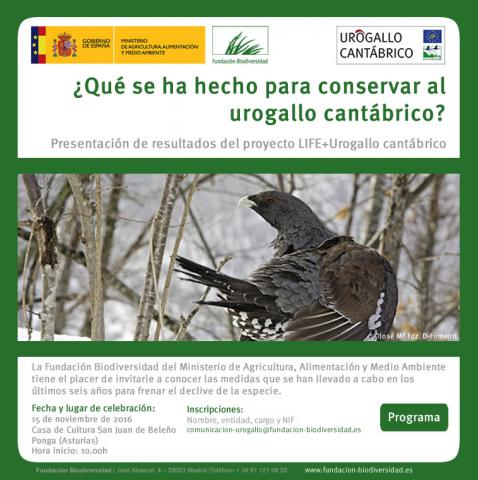 The LIFE + Cantabrian capercaillie project comes to an end. During the past six years, governments, private entities and civil society have joined forces in a pioneering project to halt the decline of an endangered species. It is estimated that the Cantabrian capercaillie has fallen by 70% of the sites occupied by three decades ago.

To halt de decline of this subspecies endemic to the Iberian Peninsula and promote recovery, the program has made efforts to ensure a favorable conservation status of the Cantabrian capercaillie habitats through restoration and enhancement activities, promote reproductive success and survival of adults, and social awareness and public participation, increasing knowledge about subspecies and its habitat.

The project is coordinated by the Biodiversity Foundation of the Ministry of Agriculture, Food and Environment in Spain, funded 50% by the European Union through the LIFE + Programme, and has as partners with the Autonomous Communities of Cantabria, Asturias and Castilla y León, through the Natural Heritage Foundation of Castilla y León, Inter-Regional Consortium for the coordinated management of the National Park Picos de Europa, SEO/BirdLife and the financing of the Autonomous National Parks Institution and Iberdrola España Foundation.

The final results of the project will be presented in Ponga (Asturias, Spain) on November 15 in an open seminar, where participants will exchange points of view that will enrich the future work of conservation of the cantabrian capercaillie.